Heads turned, mouths whispered, others just stared.  When Odessa Madre entered a room, she got a reaction.  It was more than just her ample girth. Yes, at 260 pounds, she had a frame that caught glances.  Of course, her floor length mink coat and matching hat, a luxury nearly impossible for Blacks to afford in the 1930s and 1940s, garnered stares laced with envy.  However, it was her reputation as a notorious numbers runner, and the success in which she ran the game, that made Odessa feared, revered, and unforgettable.

I was drawn to Odessa Madre because her story combines race, economics, social class and democracy within the complex and rich tapestry that made up Washington, D.C. in the 1940s, 50s and 60s. The city’s representation of equality in the nation’s capital was duplicitous, as Jim Crow laws encroached on the lives of African Americans. However, within the confines of those laws was a burgeoning Black middle class that found success on their own terms.

Odessa’s story is like so many others who get caught up on the other side of the law – feeling like an outsider, wanting to be in charge, and being a rule breaker.  I had a chance to speak at the Mob Museum out in Las Vegas, discussing why she made the choices she did.

A Little Bit More About Odessa….

Dunbar High School, the segregated school for African Americans with a reputation for excellence, became a hub of learning – and a primer for greater opportunities in the “real world”. The expectation was that, while jobs were limited, if you looked the right way and spoke the right way, you would be on the best economic rung possible. 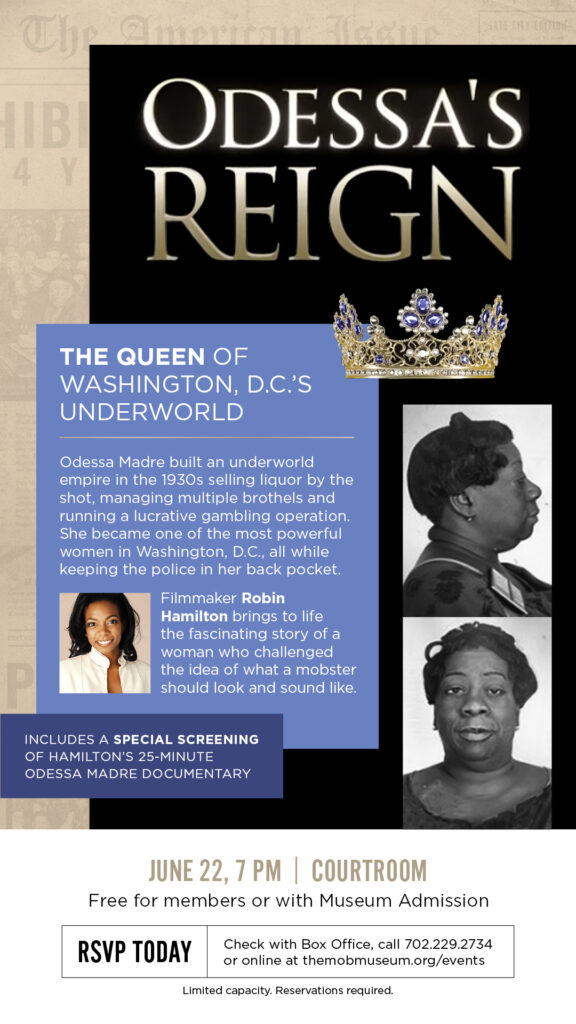 Odessa attended Dunbar and exceled academically, but knew that because of how she looked, and her sexual orientation, she would never “fit in”.  Determined to make a way on her own terms, she created a life for herself.  She defied the odds, if only for a brief moment, to become one of the wealthiest self-made women in Washington, D.C.

Club Madre on 14th street became the place to be, and celebrities breezing into town made this a mandatory stop.  Her confidence and unapologetic stance for who she was (despite the consequences) caught my eye and  gave me a glimpse into her kingdom that was the underworld.

At the height of her game, Odessa was netting $100,000 a year in 1952 from her business – that is close to a million dollars today.  Those are numbers were unheard of for a Black woman during that time.

However,  the empire started to crumble as the players were beginning to be investigated, and rumors of rampant police corruption came to light.  The problem was becoming so big, that a wiretap found Madre to be in the center of a significant part of the crime.  A committee, led by Senator Estes Kefauver formed the Kefauver Commission, that aggressively sought to root out such corruption.  Ms. Madre’s number would eventually be up.